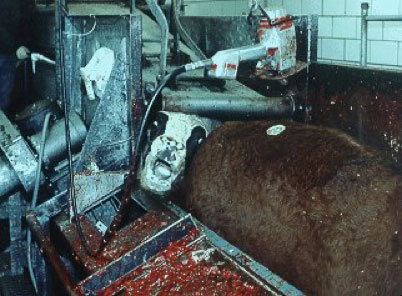 The Slaughterhouse Act says that all animals should be stunned prior to slaughter, supposedly to render them unconscious and insensitive to pain before having their throats cut and bleeding to death.

However, this is rarely the case: Slaughterhouse workers are on piece-work, ie: they get paid for the amount of animals they kill and process, so they rush to get as many animals killed as possible, consequently many animals are not properly stunned and go to their death merely paralysed.

It is estimated that around 90 % of animals are not effectively stunned prior to slaughter.